The heat wave has broken, but my appetite is still on the lam. What can I do? I've been eating PB&J's at my desk in an attempt to ward off starvation by heat. But drinking all that plain water was getting a bit old. In an attempt to brighten up my pitcher, I whizzed together a peach drink recipe that Russ Parsons included in an article on Wednesday about the Masumotos, a family of peach farmers in California. I've been imagining their farmhouse surrounded by orchards for the past few days. How nice would it be to walk between the peach trees at dusk, sipping on this thirst-quencher, ice clinking in the glass? Pretty nice, I imagine.

While it pains my health-loving heart to purchase and ingest anything with high-fructose corn syrup, I did as I was told, and bought frozen lemonade concentrate. This morning, I peeled and pitted three peaches and blitzed them with some pineapple juice and the concentrate in my food processor. Because I don't own a blender. If you do own a blender, by all means, make this drink in your blender. In my Robot Coupe, the peaches didn't entirely liquefy and I was left with a drink with bits floating about in it. Not entirely bad, but not entirely good either.

With club soda to thin out the puree and add a refreshing sparkle, the drink is a welcome change from all those bottles of chilled water I've been drinking. It's fruity and not too sweet, and you can control the amount of flavor with a splash or more of soda. Sitting in front of my air conditioner this morning while I sipped on my peach quencher, I could almost imagine myself on cooler shores.

Which is where I'll actually be! Well, not on cooler shores, exactly, but rather mountaintops. Tomorrow we're going to Colorado for a week of hiking and camping and total immersion in wildflower and grand vista photography. I can't wait. I'm not sure we'll have much of a chance to concentrate on quality eating between our athletic exertions (it might be GORP all the way) but if you have suggestions about where we could get a meal in the Boulder/Denver/Rocky Mountain National Park area, do let me know!

1. Blend the peaches, pineapple juice and lemonade concentrate. Pour the mixture into four (14-ounce) glasses and fill the glasses with ice. Top with club soda (about one-quarter cup per glass). 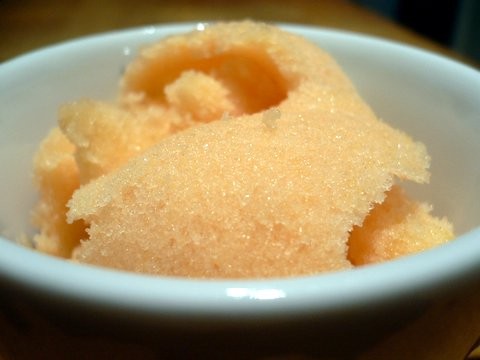 It's been quiet around here, I know. It's not that I haven't been blogging, it's that I haven't been eating. People, it's too damn hot. All I can stand to do, besides drinking so much water it's coming out of my ears, is eat a yogurt every now and then, or maybe a graham cracker or two, and even that might be pushing it. Leafing through my recipes while I wilted in the heat brought me absolutely no satisfaction and the most appetizing thing I could think to do was to go sit in an air-conditioned movie theater (watching this, which you must must must go see) and drink yet another bottle of water.

But then I realized that the latest Sugar High Friday was going to feature frozen desserts and when I stumbled across this simple three-ingredient recipe which transforms frozen sugar-sweetened peaches and a dollop of yogurt into gelato without an ice cream machine, I figured I had to try it out. The recipe comes from Russ Parsons (who else?) who learned the technique from a Sicilian chef named Ciccio Sultano (I have a distant cousin named Ciccio in southern Italy, so this endeared the recipe to me from the get-go) who was named by Gambero Rosso to be one of the great young chefs cooking in Italy a few years ago.

But let's be honest, the most appealing thing about the recipe was the short ingredient list and the simplicity. Peeling three pounds of peaches sounds annoying, but it took me less than 15 minutes. I chopped the peeled peaches into small dice, then froze them in a single layer. I went out for a drink to celebrate the last day of Ben's job (Ben got a new job! Cause for much rejoicing around these parts) and came back to whizz the frozen peaches in the food processor with a bit of sugar and a few spoonfuls of yogurt.

After a minute of processing, a creamy, pink mass came together in the bowl. I tried a spoonful - it was delicious. I put the bowl into the freezer to firm up for another 20 minutes and then had myself of bowlful of the light, refreshing gelato. Not too sweet or slickly fat, the peach flavor was gorgeous and the consistency was satisfyingly creamy. I froze the rest of the gelato overnight and it crystallized and became much harder - all you have to do to remedy this is pulse it in the food processor again (my camera pooped out last night, so what you're seeing up there is the crystallized, more frozen version from this morning).

But you really should eat this the same night you make it - it's just better and fresher that way. Besides, what else are you eating in this heat that you can't have gelato for dinner?

1. Cut the peaches into very small pieces. The smaller you cut them, the faster they will freeze and the finer the final texture will be. Arrange the peach pieces in a single layer on a rimmed cookie sheet and freeze solid, about 2 hours.

2. Put the frozen peach pieces in a food processor with the sugar and grind briefly. Add the mascarpone and pulse until the mixture is smooth.

3. Empty the food processor into a small container and freeze again, 20 to 30 minutes, before serving. If the ice cream freezes solid, simply process it again briefly before serving.